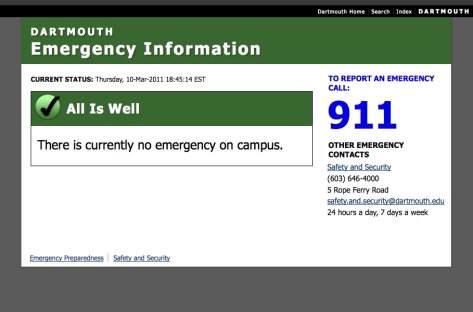 In light of events affecting campuses in past years, including Hurricane Katrina and the tragedy at Virginia Tech, many colleges and universities have developed protocols for managing emergency situations. The web is a key component in emergency management as a tool for notification, instruction, and communication. As a masterful worrier and contingency planner, I was only too happy to lead the project to develop a plan for using the web in an emergency.

In designing these elements, we focused on ease of activation, flexibility, and lightweight design. In an emergency we knew we would need to act quickly and flexibly, as we could not predict in advance what would be needed. We would also receive a good deal of web traffic and needed to minimize demands on our infrastructure.

The campus has done a number of tests and trial runs and our protocols have executed according to plan. It’s a solid and robust plan—just what a worrier needs. While I hope its use remains purely in test mode, the Web Emergency Plan could make an enormous difference should Dartmouth ever need to put it into effect.